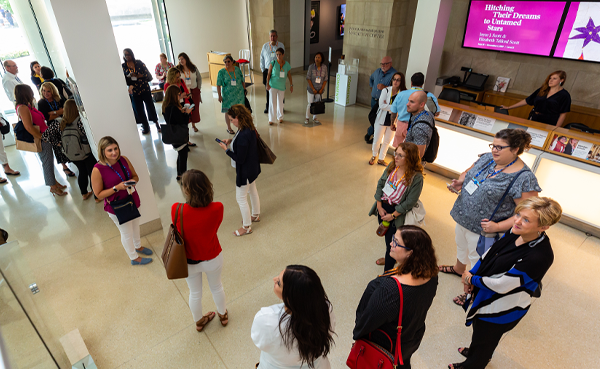 Events as a Bridge to Ease Generational Friction & Enrich Collaboration

Our world has plenty of complex problems to solve, and generational friction isn't helping us move the needle. No single generation has all the answers, but when we come together for more fruitful dialogue, that's when real progress happens.

I sigh heavily when this torpedo is fired in generational battles.

Then, when I hear a few small-minded Boomers respond with "snowflake remarks," I sighed even more.

Event organizers have a golden opportunity to seize in brokering more peaceful and productive exchanges across the generations, but it will take finesse and persistence to advance this mission.

Aging – nobody escapes it. It's happening to all of us, from the moment we're born.

But longevity, coupled with healthier lifestyles, is ushering in new life stages.

The 2030s will usher in one more remarkable demographic shift.

Older people will outnumber children for the first time in U.S. history. According to the U.S. Census Bureau's projections, by 2034, there will be 77 million people 65 years and older, compared to 76.5 million under the age of 18.

Does it make sense for the largest population segment to sit idle, especially when so many of these people are vibrant, knowledgeable and eager to pitch in?

No, but there are new roles to embrace, as they shift from manager or leader to coach or trusted advisor.

They're too young to be done, but not ready to exit.

More importantly, they have priceless legacy knowledge to share to refine future strategies.

Everyone gets older, but only some get elder.

Diehard traditionalists, especially those hesitant to learn new technology, will likely be counting the days until they retire.

Wish them well, but they're not who you'll be designing for in the future.

The elder group you want to engage are your loyal attendees who have been coming to your conferences year after year throughout their career.

Lifelong learning and networking have always been top priorities for this crowd, and many will jump at the chance to participate in or even facilitate intergenerational discussions.

In Chip Conley's best-selling book, Wisdom@Work: The Making of a Modern Elder, he chronicles his journey from successful entrepreneur to advisor at Airbnb.

In this new role, Conley suddenly found himself surrounded by Millennial colleagues. One thing he noticed — while those beyond age 50 tended to have an edge on E.Q. (emotional intelligence), younger colleagues had stronger command of D.Q. (digital intelligence).

This gave way to a mutual mentorship model, where wisdom and knowledge flow in both directions —from older to younger AND from younger to older.

Bringing this back to the events realm, imagine if you had a Mentor Lounge where these connections and conversations could happen more readily.

Layer in a few roundtable chats, and the relationships across generations grow even stronger.

OK, Boomers… Ready to Start Climbing Down the Ladder?

According to a recent USA Today/LinkedIn survey of 1,019 working professionals in September 2019, forty-one percent of millennials said they've found it challenging to move up in their fields because Boomers are delaying retirement.

With five generations in the workplace (soon to be six), ignoring these issues isn't wise, especially in light of today's business environment that's continually evolving.

Phased Retirement is one possible remedy, where rather than retire, older workers might gradually downshift to supporting roles.

It may be uncharted territory with many more challenges that need to address, but it's a topic ripe for discussion and brainstorming at conferences.

As lifespans expand, the career ladder will likely transform into a graceful arc that peaks and then gradually subsides over several decades.

It's Time to Double Down on Learning & Cognitive Diversity

Technology continues to accelerate the rate of change, which often exceeds our human ability to adapt.

Cognitive diversity (age is only one dimension) is one way to counter this.

Lifelong learning is no longer a luxury— it's the opening ante to compete.

"Rinse & Repeat" agendas won't work for the future of events.

The same goes for certification programs.

Design these well, with a keen eye on continuous improvement, and people will flock to your organization and your events.

By the way, higher ed is also struggling to align with this rapidly changing workforce paradigm.

"The days when you could get a four-year degree or six-year degree and dine out for 35 years on that knowledge? That is so gone in the age of acceleration."

It's also one more bit of evidence that supports why Meetings Mean Business.

Donna Kastner has spent a good portion of her career as an event experience design consultant and is now building a dynamic collaboration community for executives age 50+ who are striving to make a smooth segue from full-time job to part-time consulting gig. As the founder of Retirepreneur, Donna’s championing a movement to help others design flexible and fulfilling encore career opportunities.